The RED DONS are the continuation of THE OBSERVERS. After members abruptly left the band in 2005 Douglas Burns, the Observers" lead singer, artist, and primary songwriter teamed up with Hajji Husayn (CLOROX GIRLS) to continue on with the band. Next, they added Derek Skokan (REVISIONS) on drums and Justin Maurer (CLOROX GIRLS) on guitar and re-named this new line-up the RED DONS. With one 7" and a LP thats gonna be released soonish, the RED DONS invade Europe for the first time and fans of THE VICIOUS, , GORILLA ANGREB, CLOROX GIRLS and AGAINST ME! As to be expected the RED DONS stays in tune with the melancholy, melodic, and sometimes unpredictable punk sounds of the other bands the RED DONS members play / played before. Vocal harmonies take the songwriting to places yet ventured by any previous Observers recording.
Also playing for the first time in Austria are the ZATOPEKS from, a Poppunk / Rocknroll band the UK. Formed in 2001 this five guys toured europe several times and have quite some reputation for being a party band. The critics wrote: "Imagine The Undertones crossed with The Ramones and you get a fairly good idea of what the Zatopeks sound like. The opening number "Jimmy's Girl" would have been a chart hit if The Undertones has released it in their prime." Or "If the Zatopeks were a beer, I'd buy a whole case and drink a bottle every night." Well, fans of GROOVIE GHOULIES, SONIC DOLLS and THE APERS will definitey get a smile on their faces" 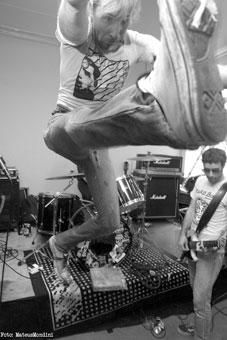